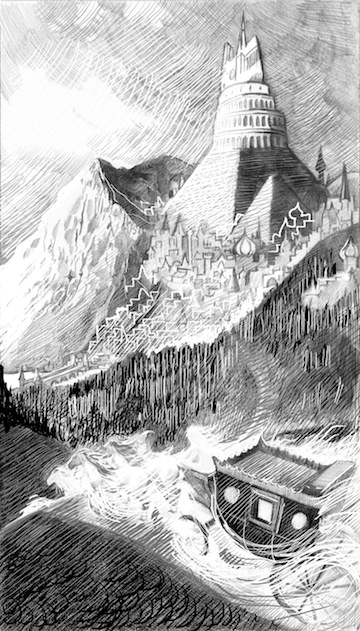 Sketch of the Day:

Scale serves as one of the biggest differences between The Fiend and the Forge and the earlier books in the series. It is an altogether bigger book – not just in terms of length, but also in terms of the scale of the world/settings and the stakes in play. I want the illustrations to echo and reinforce this dynamic and so here is a sketch of Max’s arrival to the capital city of Blys – one of the four kingdoms that have emerged in the new order. It’s just a rough sketch, but my hope is that it immediately conveys a sense of size/depth and also tells you a little bit about the culture that would build or inhabit such a city. Not exactly a non-hierarchical society, is it?