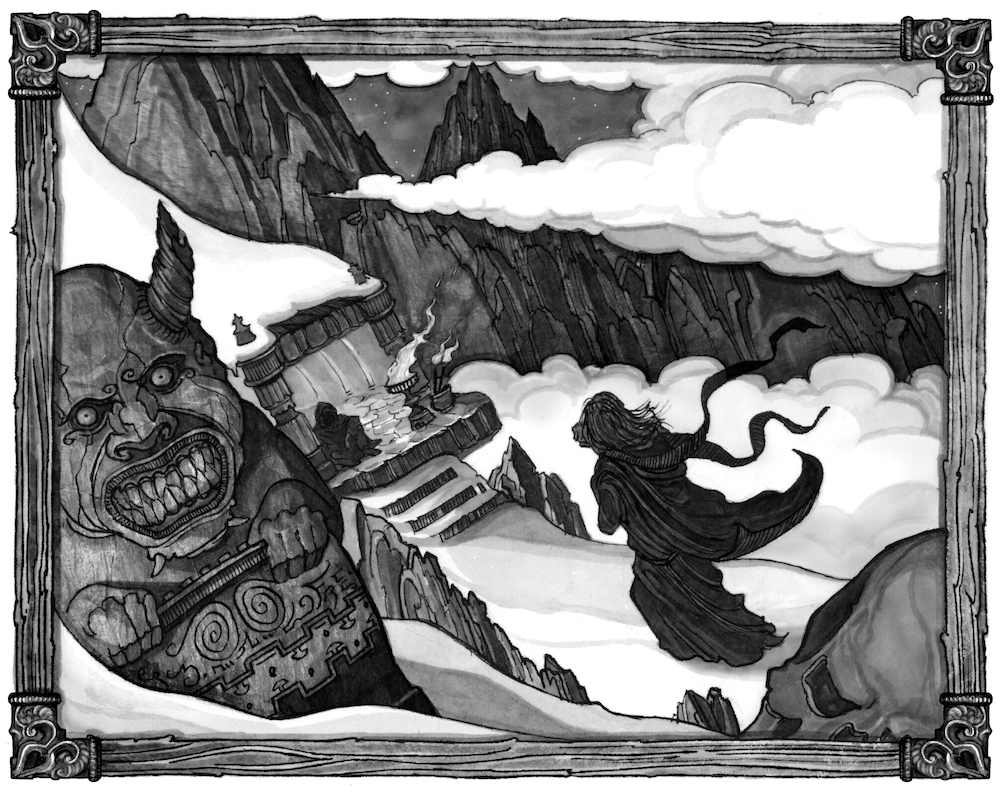 The Witchpeaks are the tallest mountains in the world. At one time they were called the Himalayas, an “abode of snow” in ancient Sanskrit, but no longer. That name — like so much else in the world — had changed when Astaroth came to power. Although the mountains were still wreathed in snow, they were now named for their chief inhabitants.

Most of the witches lived below the timberline, but their holy places nestled nearer to the summits. Some were little more than primitive shrines, storm-lashed ledges where the witches prayed to their gods and wove the wild magic of their kind. But the most sacred spaces were inside the mountains themselves, carven temples containing treasures that dated back to Neolithic man. These were known as the ossuaries and their treasures were not gold or jewels, but human hair, skin, and bone.

Living men were not permitted in the ossuaries, but one was now ascending the summit of great Ymir, which housed the largest collection of remains. The man was not a native Sherpa or one of the witches’ servants. He carried no pack or walking stick — he did not even use a rope or axe to anchor himself when the gales came howling as they always did at sunset. Why Ymir did not shake off this foolish pilgrim, she could not tell, but it would happen soon. And so the old witch sat comfortably by the brazier, chewed her betel, and waited for him to die.

It was late when he reached her. He stood panting at the edge of the firelight, his tangled hair crusted with ice and crowned by the twinkling stars. Spitting her quid into a cup, the witch grinned and revealed a handful of filed, red-stained teeth.

“I was rooting for you,” she lied. “I have never seen one climb the mountain as you have done. Ymir must favor you. A pity I must turn you away.”

The stranger did not reply. He must not speak our tongue, thought the witch, and wagged a bony finger. “You cannot enter,” she croaked in English. “I am sorry, but you must leave.” With a smile, she bowed and made a gesture of peace.

“I must enter,” rasped the stranger, speaking Nepalese and stamping the snow from his boots. Tiny icicles fell from his gray beard and black cloak to shatter on the ledge’s flagstones. He was a tall, rangy man with a weathered face and eyes like iron rivets. His voice was deep and assured. This was no lost soul, no poppy-addled wanderer seeking death or wisdom.

The witch smiled a different sort of smile.

“Men do not enter here,” she growled. “Begone or I’ll summon ghosts to devour your flesh and scatter your bones on the wind!”

With a jangle of bracelets, she shook her arms free of her furs to show this stranger the many runes tattooed upon her brown skin. Even a fool must see that she was no trifle and that ancient spirits owed her their allegiance.

“I have entered here before,” the man replied. “And each time I have climbed the mountain to honor your traditions. But that is slow work and now I require haste, Dame Hakku.”

The witch’s fierce grin evaporated. “H-how did you know my name?” she sputtered. “Who are you?”

The very word radiated power. Even as he spoke it, the witch froze as though time itself had stopped. She stared ahead unblinking, her body stiff as a corpse while the man bent to wrap her furs warmly about her. When this was done, he strode away beneath the archway.

Hours passed before he returned, emerging like Virgil’s shade from the ossuary’s depths. Night was fading, the stars growing pale as the first hints of dawn shone in the eastern sky. Miles below, the earth was hidden beneath a sea of clouds that stretched away to the pink horizon.

Dame Hakku remained by the smoking braziers, hunched like a gargoyle. She longed to move, to flee, to alert her sisters to this desecration. But she knew that it was folly. The witch had known it as soon as the visitor uttered his name. True sorcerers were scarce as comets and there had never been any to match this one.

He stooped before her now, clutching a pair of Canopic jars from the deepest vaults. The witch wanted to scream. But she merely stared into those hard eyes, transfixed like a bird by a serpent. The eyes softened.

“I will return them,” he promised.

“When?” she croaked, dimly aware that her spell had been broken.

In answer, the sorcerer touched Hakku’s forehead. Her memories of the evening trickled away like water squeezed from a sponge. “When we meet again,” he whispered. “For the very first time.”

And with that he vanished.