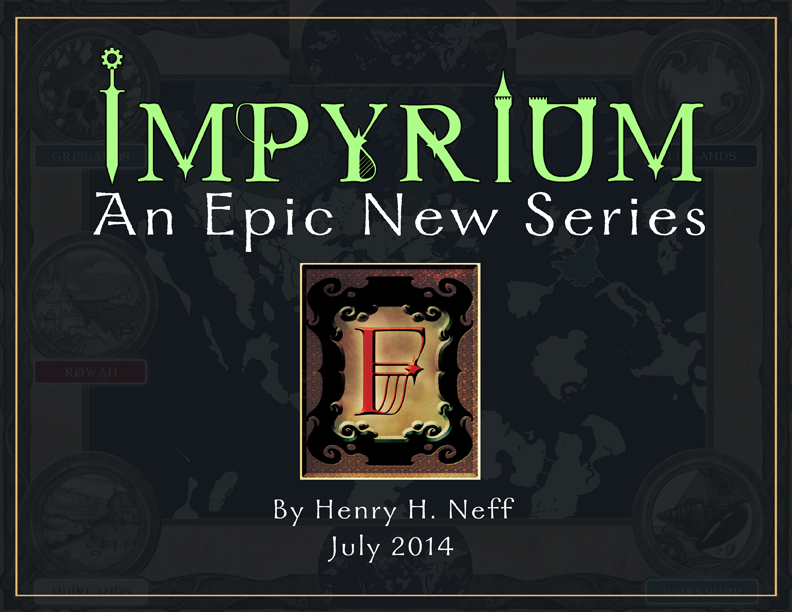 If you want to make a living as an author, you have to think one project ahead. Even before I started working on THE RED WINTER, I was kicking around ideas for a new project — a series that would take place in “The Tapestry” world, but unfold thousands of years later. That world, while sharing some of The Tapestry’s foundations and mythology, would be very different and reflect tectonic shifts not only in societies, cultures, and religions, but even geography. That world — and the empire that predominates — is called “Impyrium.”

The moment I finished edits and illustrations for RED WINTER, I started work on Impyrium’s first book, with the goal of writing several sample chapters and some supplementary materials that would introduce the world and my vision to potential publishers. Collectively, these are what’s known as a “pitch”. Last week, my agent sent this pitch to editors and publishers that he thinks could be a good fit. Over the next few weeks, editors will be reading it, discussing it with their peers, and — if they like it — presenting it to a broader group that includes people from departments like sales and marketing, rights (i.e., those who license titles to foreign publishers), finance, etc. If there’s consensus that “Impyrium” is a series they’d like to get behind, they’ll make an offer.

So, what goes into an offer? The element that most people focus on is “the advance”. An advance is “an advance against royalties” which essentially means the publisher gives the author some money upfront to purchase the publishing rights and enable you to pay your bills while writing/finishing the book. They will then deduct the advance from any future royalties (an author’s share of revenues) that accumulate when the book is ultimately released. Only 30% of books ever earn out their advance (!) which means that many authors never see a penny other than the advance they received.

Naturally, most authors would like to receive as big an advance as possible. Not only is it money in the bank, it’s the only guaranteed income they might see from months or even years of work. Furthermore, a sizable advance means that the publisher has truly invested in the title and the author — they’ve placed a big bet on the book and are likely to back it with the necessary support to help it find readers. If they aren’t willing to pony up for a title, it could mean that it’s not going to be a priority when it comes to marketing, PR, etc. That said, a really huge advance can have its problems too — it puts tremendous pressure on an author and book to succeed. The book might be a masterpiece and sell millions of copies, but if it doesn’t earn back its advance, the publisher might view it as a failure, which could hurt the author’s reputation when pitching future projects. We see this all the time when films that did well at the box office ultimately lost money because they had a crippling budget.

While the advance is what many people focus on, there are many other factors to consider when choosing a publisher. These might include:

And that’s just a partial list of the things I’ll be weighing as we try to find “Impyrium” a proper home. In a perfect world, publishers will clamor for it, we’ll receive multiple bids, and make an informed decision based on some of the factors I’ve listed. That’s a best-case scenario. The worst-case scenario is that no one wants it. That happens all the time to writers — and not just those who are trying to break into the business. While I think “Impyrium” is awesome and destined for great things, it’s also my baby and I’m not impartial. We’ll have to see what the marketplace thinks. The good news, is that it won’t be too long until I know the verdict. Cross your fingers and stay tuned!